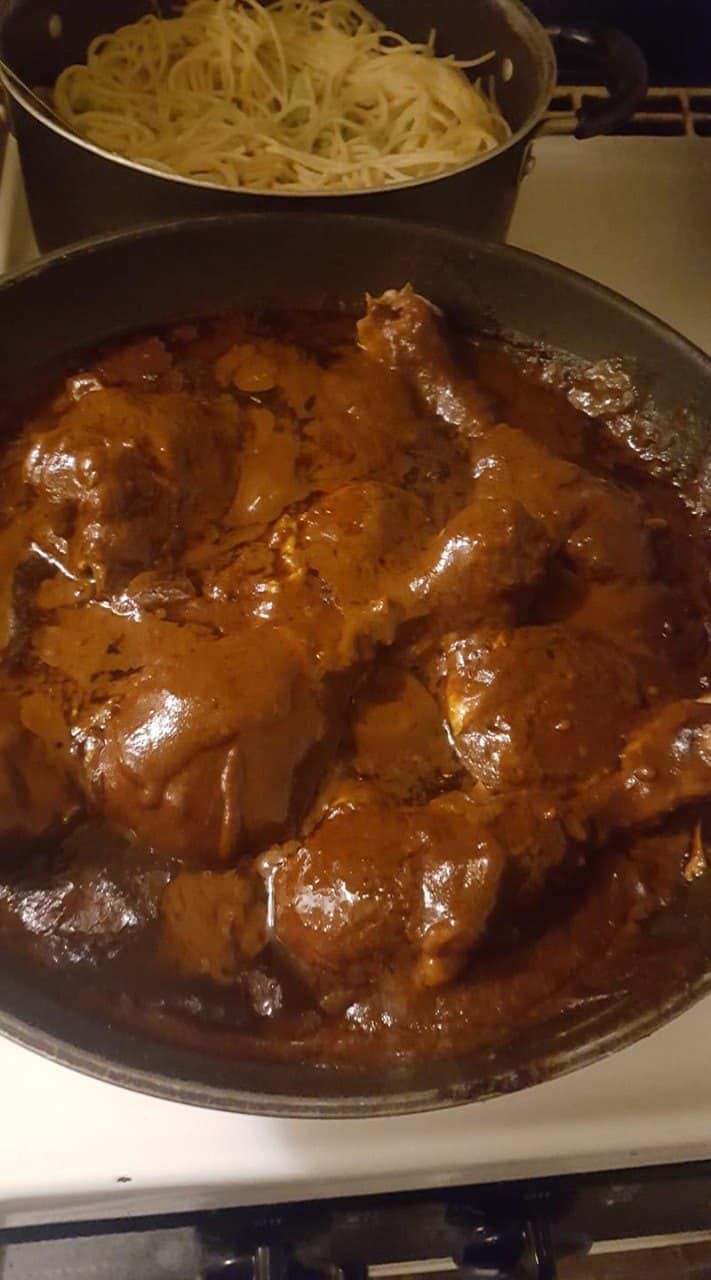 Ingredients:
Chicken:
2.5 pounds of skinless chicken legs
1 large white onion
3 garlic cloves peeled
1 teaspoon salt
Mole Sauce:
10 dried Chile Guajillo peppers washed and with the stems removed
4 dried Chile Ancho peppers washed and with the stems removed
3 dried Chile Pasilla peppers washed and with the stems removed
5 large Roma tomatoes each cut into four pieces
1 large white onion sliced
8-10 garlic cloves
5 dried pitted prunes
2 tortillas toasted until crunchy
2 teaspoons salt
1 teaspoon ground cinnamon
1 teaspoon dried oregano
¼ teaspoon ground cloves
6 cups low-sodium chicken broth or you can use the chicken broth from the cooked chicken legs
1 tablet of Abuelita chocolate or about 3 ounces of Mexican chocolate ,or ¾ cup of semi-sweet chocolate chips*
2 tablespoons peanut butter
2 tablespoons of granulated sugar
Directions:
Cook the chicken:
Add the chicken, the whole onion, 3 cloves of garlic, 1 teaspoon of salt and 8 cups of water to a large pot and bring it to a boil.
Reduce the heat to medium-low, cover and simmer for 15 minutes or until the chicken has cooked through and the internal temperature of the chicken reaches 165 degrees F. Add a few extra cups of water if the water level gets too low.
Remove the chicken from the broth and set aside then strain the broth and save it for later.
Prepare the Mole sauce
While the chicken is cooking, heat the oven to 475 degrees F and line a large baking sheet with sides with nonstick aluminum foil.
Add the cleaned Guajillo, Ancho and Pasilla peppers to the pan and toast them for 6 minutes, flipping them halfway through.
Remove the pan from the oven and set aside while you fill a large bowl with warm water.
Soak the chilis in the water for at least 30 minutes or up to 1 hour. Drain the chilis from the water and set aside.
While the chilis are soaking, roast the tomatoes and sliced onion on the same baking sheet for 20 minutes, or until the bottoms of the tomatoes and onions turn a dark brown or black color.
Add tomatoes, onions, 8-10 garlic cloves, prunes, toasted tortillas, 2 teaspoons salt, oregano, cinnamon, cloves, and 3 cups of chicken broth (use the leftover from the chicken or store-bought broth) to a blender or food processor. Blend for 3 minutes or until smooth.
Coat the bottom of a large pot with 2 tablespoons of olive oil and place over low heat (use the same one that you cooked the chicken in).
Strain the mole sauce through a fine mesh strainer directly into the pot, leaving about a cup of sauce in the blender.
Add the chilis to the blender along with at least 3 more cups of chicken broth or more as needed. Blend for 3-4 minutes, or until smooth. Strain the sauce through the mesh strainer directly into the pot and stir to combine.
Bring the heat up to medium and let the sauce simmer for 10 minutes, then reduce heat to medium-low, cover and simmer for 30-45 minutes, or until it reaches your desired thickness. The longer it simmers, the thicker it will be.
Add in the chocolate, peanut butter and sugar and stir until dissolved. Simmer for another 5 minutes. Taste and add more salt or sugar as needed.
Place chicken in a large shallow bowl or deep platter and pour the mole sauce over. Serve with Mexican rice, garnished with fresh cilantro and toasted sesame seeds.
Enjoy !! 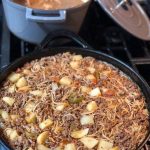 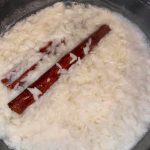