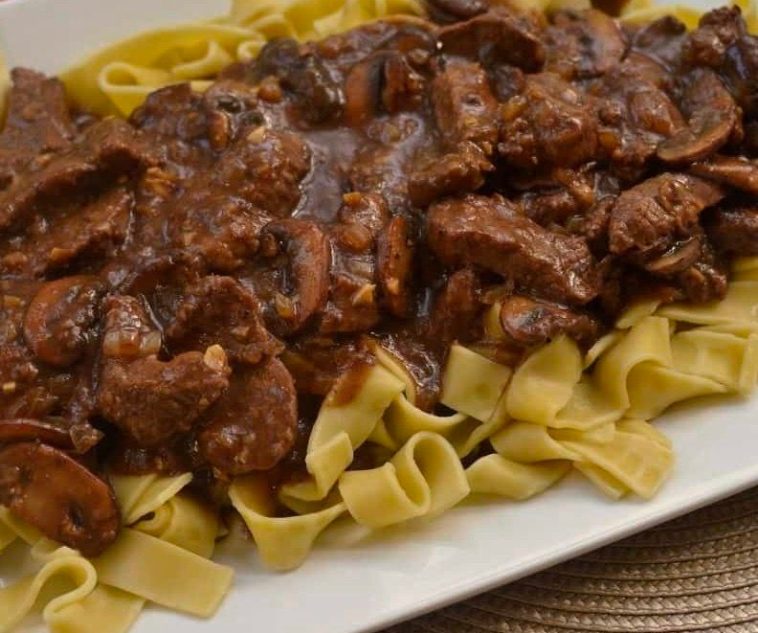 INGREDIENTS NEEDED:
2 pounds.Of beef stew meat.
Canned condensed cream of mushroom soup; I used a 10-ounces can.
Brown gravy mix; I used 1 packet.
Beef broth; you’ll need approx. 1 cup.
A medium-diced onion.
2 minced garlic cloves.
1 Tbsp.Of cornstarch, mixed with a Tbsp.Of water.
PREPARATION:
First Step: Mix together the cream of mushroom soup, the gravy mix, the beef broth, the onion, and the garlic in a medium bowl. Whisk together. It’s OK if it has some lumps; they’ll smooth out during slow cooking.
Second Step: Put your stew meat in a crockpot that holds 4 quarts. After pouring the gravy mixture over the meat, combine the two by giving it a little swirl. Cook, covered, on LOW for a period of 7 hours.
Third Step: When the meat is done cooking, take it from the pan using a slotted spoon and put it aside. Combine cornstarch and water and stir it in (this will thicken up the gravy.)
Fourth Step: Once the gravy has thickened, return the meat to the crockpot and simmer for an additional 5 minutes.
Fifth Step: You can serve it over some mashed potatoes or some egg noodles.