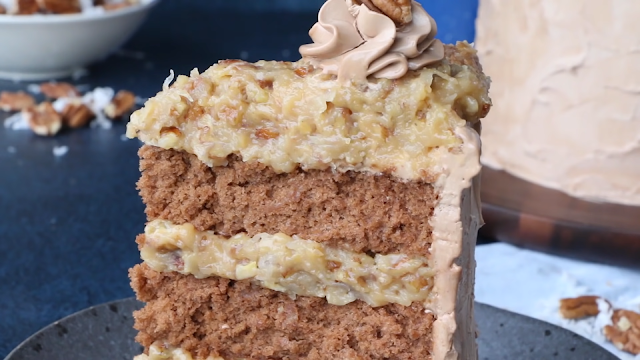 This is one of the best cake recipes you’ll find. It comes straight from the recipe vault of Mason’s late grandmother, It’s a moist and chocolaty cake that will make you melt.

If you are one of the chocolate cake lovers, then today you have a strong reason to eat it without feeling guilty about the calories you gain, because today is “German Chocolate Cake Day” and it is a chocolate cake rich in chocolate and it is common to add a layer of cherries and coconut to it.

The history of cake:
These baked goods were called cake, and the origin of the name goes back to the word “kaka” in Norway in the past, as for the word cake in English dictionaries, it takes us back to the 13th century, when cake was a popular, cheap and satiating food, on which millions of extremely poor Americans lived at that time, Over time, it evolved and took all its current forms.

The ancient Greeks also knew the first forms of cake, which were called “satura”, consisting of flour mixed with eggs, milk, nuts and honey, and in ancient Rome, baked goods were produced that looked like cake.

On June 11 of each year, this delicious dessert is celebrated by eating it, in addition to learning more information about its origins, which many are mistaken about.

According to the “daysoftheyear” website, many believe that the chocolate cake is of German origin, because of its name, but the truth is that its name was acquired from its creator, “Samuel German”, which is contrary to what his name indicates of American origin.

And Samuel loved dark chocolate because he loved rich and complex flavors, so he created the cake recipe as a culmination of this love for this sweet.

How to make Grandma’s German Chocolate Cake:
We take 4 ounces German chocolate and melt it in the microwave until it’s just melted.

While the chocolate is cooling down go ahead and whip egg whites and use a hand mixer for whip these egg whites to firm but moist peaks they shouldn’t look curdled or dry and crumbly, only took two minutes.

Get some buttermilk, add some vegetable oil and mix them a little bit.

Next put some flour in a bowl add some baking soda, salt and whisk them all to incorporate it all throughout the dry ingredients and site it aside.

Get back the melted chocolate and put some worm water, we are making a water ganache.

In a Cake Mixer Blender Machine put Butter (unsalted), sugar, egg yolks, after mix all the ingredients go ahead and add the melted chocolate with some vanilla extract.

Turn the mixer on and add in flour we make and buttermilk and alternating, 1/3 portions.

Now we are going to fold our fluffy egg whites into the mixture and mix it all.

Take eight inch pans add paint it with butter and divide the batter evenly between the tree pans.

Next we’re going to put these into the oven at 350 degrees.

then go ahead and make the filling while the cake is baking, so in a medium heat add evaporated milk with egg yolks, vanilla extract whisk them a little bit then add some sugar, salt, butter and don’t stop whisking and cook for about 12 minutes.

Next add in our pecans chopped and coconut baker’s after mix put it in a bowl and let it cool down.

After taking the cake out from oven let them cool for about 10 minutes in the pan then flip them out into the cooling rack, stick them in the freezer to flash cool them so that we can fill it with our frosting.

Now let’s make our Chocolate Swiss Meringue Buttercream we need to bring water in a medium saucepan then reduce the heat until it’s just simmering.

Next, place your metal or glass mixing bowl on top. The bowl should not be touching the water.

Then put white egg with sugar and whisk them until you no longer feel any granules of sugar in between your fingers.

Place the mixture to the blander mixer and mix between 10 to 15 minutes.

Put the meringue on the fridge for about 10 minutes to cool the meringue. it can take more time to cool.

Reduce the speed to low, then slowly add in your butter in small chunks followed by your salt, melted and cooled chocolate, and vanilla extract.

Whip it on high for 8 to 10 minutes until the color is light and fluffy.

Drizzle in your cooled chocolate, vanilla, and salt and mix until it’s smooth.

Next we start decorating the cake by adding coconut pecan filling then put the second cake and the filling and the last cake on the top.

Now it’s time to put on the Chocolate Swiss Meringue and cover all the cake you know the process then put the filling on the top.

You can decorate the cake by making some swirls of Chocolate Swiss Meringue on the top of the cake. 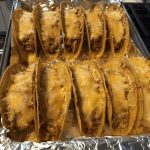 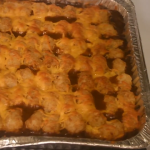